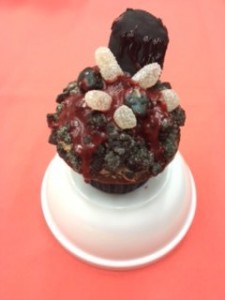 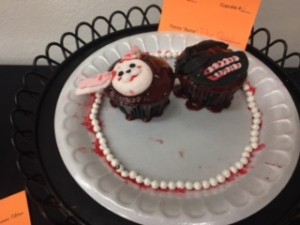 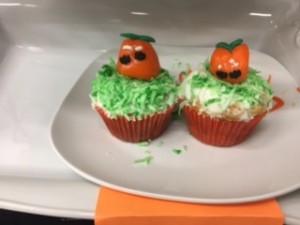 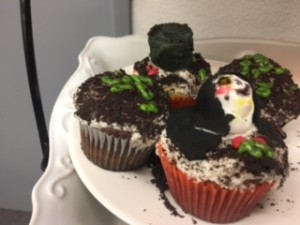 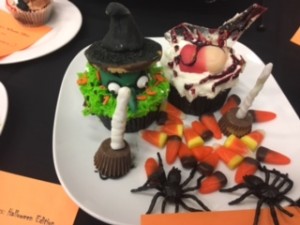 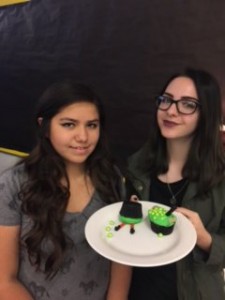 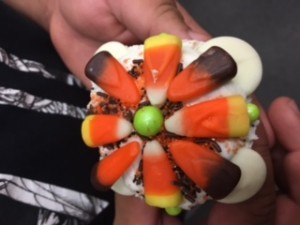 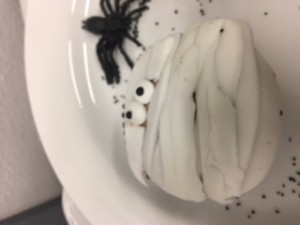 Cupcake? Wars? Yes, Culinary Arts II-III classes climbed the top of that candy mountain. Just in time for Halloween, making cupcakes too scary to eat! To further our culinary skills our task was to, in three days, designs, create and bake beautiful cupcakes to be judged on FRIDAY THE THIRTEENTH (not really) I just wanted to add to the atmosphere. Are you feeling it yet Mr. Krabs? We were! Our culinary room turned into the Willy Wonka forest as everything to top our cupcakes was required to be edible.

On our first day around what seemed to be “candy land,” the class was divided to make white-as-a-ghost creamy, smooth, buttercream, and cupcakes in two flavors: vanilla and count chocula. Have you ever used twenty-five pounds of confectioners’ sugar? Yeah, that is how much powdered sugar was needed for this sweet tooth war. Our teams were those of double, double, boil and trouble or a single cauldron bubble. With a pair of people they were able to present two, to four cupcakes, while the lone werewolf was to present one-two cupcakes.

The race had begun and we were sprinting, to construct a cupcake that was most creative, most scary, best Halloween themed, best plating, and best overall. Our Halloween town consisted of everything from witches, pumpkins, ravished bunnies and maggots. Have you seen the scene in The Wizards of Oz where the witch is crushed by Dorothy’s house? Yes, you are correct, the witch was placed gently on top of one cupcake, and under another! The best part of the whole experience was no bad blood (pun intended) between the members of our culinary classes as we cheered each other on in winning the categories.

Did you know Halloween originated in the ninth century being a part of the Celtic mythology to protect the living from roaming ghost? Oh here is another quick trivia fact before I end this paper the fear of Halloween is known as Samhainopobia, (Samhain the pagan holiday for Halloween. Samhain is a festival of the Dead. Meaning “Summer’s End”. )

At last our creatures were ALIVE (Frankenstein no?) and everyone won, well, because we got to eat the cupcakes after!  Those best of the best monsters claimed their trophies and crawled back into the coffins and the masters walked off with a sweet treat. All the “Nightmare Before Christmas” was put to sleep, waiting for the next year of cupcake wars, Halloween edition.

Culinary Arts 1 is learning to read recipes. They spent a week learning how to follow instruction, so when they got the recipes they would know how to make it. Culinary Arts 1 made mini pizzas using biscuit dough. They had a fun time following and making the recipe. When everything finished, and their mini pizzas were cool and ready, the students began eating what they worked for. 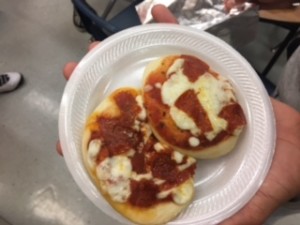 On October 11, Culinary II-lll students worked hard in the Bistro. They served lunch to students who were selected by teachers for student of the month. Dylan Canfield was our first host for the year! Leticia Contreras, Stephanie Keller, and Josue Garcia served our fellow guests. Mariah Harman was our lead organizer at setting up our bistro. This month we served House Salad, Lasagna, Garlic Parmesan Bread, and our new Chaparral Sheet Cake! We hope our students and administrators enjoyed October’s student of the month luncheon at our Bistro!

The students in culinary 3 have opened their minds to a new recipe, ” The Stuffed French Toast. ” To Make the french toast we started off by reading our recipe . The first step of making the french toast is to get the ingredients which are eggs , cream cheese , slice white bread , oil , vanilla , pecan , butter milk and butter . We also got to choose our  toppings for our French Toast . We mix all the ingredients together , started by putting the bread in the bowl full of eggs, milk , vanilla and butter. Then, we mix the pecan and cream cheese for our fillings and spread it onto the bread . Next , we put oil in the electric skillet let it get hot very fast , we put the stuffed french toast in the skillet 5 mins on each side in till it was golden brown. The french toast ended of with a pretty design of our choice . Finally it was ready to eat . 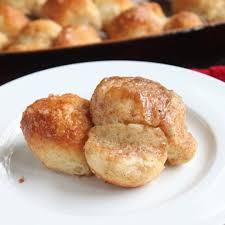 Culinary one; the open door to everything that is delicious and heavenly. This week culinary one has been focusing on what makes the kitchen, the kitchen; the organization of it all; tools and their beautiful cupboard homes. It is such an important part of the kitchen is understanding where everything goes, the quicker you find it the quicker you eat right? “Who doesn’t love eating?” said no one ever.

With the learning process of pin the tail on the tools, Culinary one made a mini version of monkey, pull apart bread called “Bitsy Bread.” A recipe so simple and so yummy it starts off, as always, preheating the oven. Then the students are required to locate a few tools, a 1/3 measuring cup, a muffin tin and a table/teaspoon set. Next they line the muffin tin with muffin papers to make everything portable, on-the-go eats. Separating some yummy biscuits they roll thing mini cinnamon delights in cinnamon and sugar before popping them into the muffin tin and baking for 8 to 10 minuets and enjoy this delectable pull apart bread with now knowing where everything is.

Today in culinary II  and culinary III we got the opportunity to create our own sandwiches. we got to choose from a variety of meats, vegetables, cheeses, and spreads. Some of the sandwich names were “Delicious Mara Creation”, “Meat Lover Monster”, and “Sofia’s Delicious Sandwich”. The “Delicious Mara Creation” is ham and salami with bacon bites a hit of zesty banana peppers along with red and green peppers. Topped with butter and home-made chipotle mayo on delicious fresh sour dough bread.

Students in Culinary I have been learning the names and functions of 50 different kitchen tools. To help them, Culinary II-III students have been organizing the equipment in drawers and cupboards so they’re easy to find. The Culinary I students follow a list to locate everything from measuring spoons to sauce pans and pastry blenders to muffin tins. There’s a lot to remember! 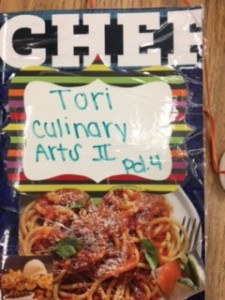 Students in Culinary II and III at Chap have been compiling “Smashbooks.” Smashbooks are interactive notebooks that give students the chance to create their own text books. They have taped or glued in reference pages with measurements and cooking terms, as well as a table of contents and recipe contents pages. Instead of writing down notes, they can doodle the notes. It’ll help the student be organized and are able to go remake recipes at home. Since it’s called “Smashbooks” everything is all smashed together and that’s the fun of it! Students are able to be creative and it brings out their hidden artistic side.

Culinary II-III students at Chaparral thanked selected teachers and administrators for serving them by delivering cellophane bags of fresh baked chocolate chip cookies. September 11 is “Patriot Day and National Day of Service and Remembrance.” Students honored the day with this small service project. They included a card with a quote from President Obama “…. With hearts of those we lost held faithfully in our memoires, we reaffirm the unwavering optimism and everlasting strength that brought us together in our darkest hour and we resolve to give of ourselves in service to others in that same spirit.”